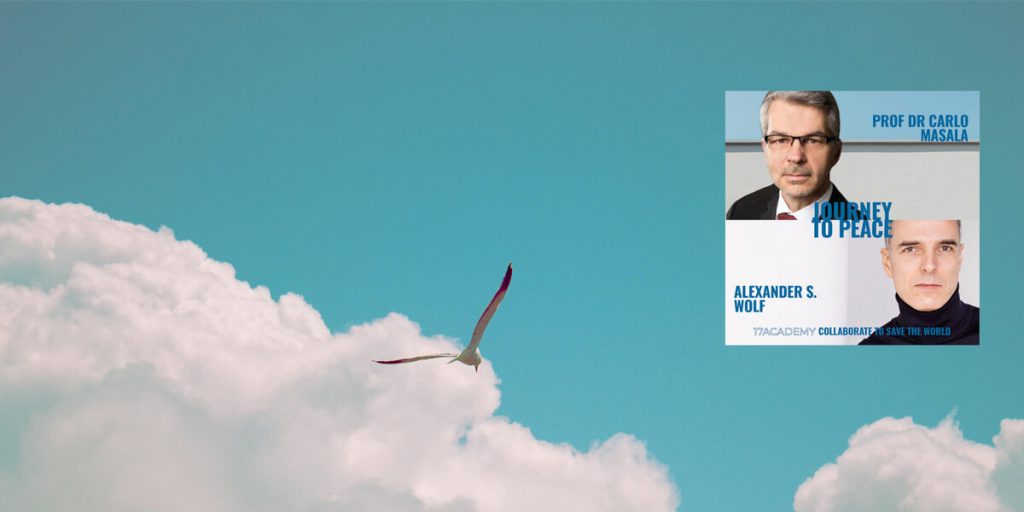 Is the Answer to Peace more War?

Alexander S. Wolf: Welcome to 17 Academy. A Journey to Peace. This is Alexander Wolf.

We're talking about and with Carlo Masala.

He's a German political scientist and the Chair of international Politics at the University of the Bundeswehr, which is the Federal Armed Forces of Germany.

ASW: You’re one of the German experts on the Ukrainian war at the moment.

You publish your own magazine. You host the Stern Magazine podcast, “Ukraine, the State of the Nation” which documents this catastrophe and offers insights, often from the military field.

And if I may quote you, you said this war can only be won militarily.

ASW: If this is the case, what comes after?

Is there any scenario that you could imagine that would lead to real peace?

CM: Well, yeah, there are plenty of scenarios.

Carlo Masala: Usually the saying goes, a conflict can never be won militarily.

This is a kind of mantra, which basically blacks out completely the possibility that, of course, wars can be won militarily.

So you need a situation on the ground, which forces Russia to negotiate seriously.

When I say this war needs to be won militarily, I don't mean necessarily that Ukraine has to basically push Russia completely out of Ukraine.

What I mean is basically Ukraine has to create a situation in which the Russian Federation has the feeling that they are going to lose much more by continuing the war.

Alexander S. Wolf: Okay. What does Ukraine have to achieve to get to that position?

Carlo Masala: Well, we are now in the third phase of this war.

The first phase was basically the Russian attempt to pursue a kind of Blitzkrieg strategy.

Then there was the second phase of the war where basically Russia tried to reorganize the troops inside Ukraine in order to continue fighting the war, which was more or less successful from a Russian perspective.

And now we have the third phase of the war where basically Russia is pursuing a massive offensive in Eastern Ukraine.

Carlo Masala: So, what is the purpose of this offensive?

Russia's claim is right now in Istanbul, where they negotiate with the Ukrainians that they want to have the independence of Donetsk and Luhansk, which actually is three times more territory than Russia controlled on the 23rd of February.

And this, of course, is unacceptable for Ukrainians.

So, with the offensive right now, Russia tries to basically set the parameters for this claim.

ASW: That would be the equivalent of Line 38 in Korea…

CM: Exactly the equivalent of the 38. Very nice comparison.

Russia insists that these two territories become independent from Ukraine.

Zelensky so far is ready to talk about the living conditions, as he called it, for people living in the Russian occupied areas.

So if Russia is pushed back and Russia has the feeling that by continuing the war, they are going to lose much more than by negotiating seriously, then there might be a situation where the Russians are ready to negotiate with the Ukrainians about the living conditions of the people in Donetsk and Luhansk, which probably mean a kind of status of autonomy like South Tyrol in Italy, like other regions, somewhere else in Europe, but basically where Ukraine doesn't have to give up this territory officially.

So, a kind of autonomous status like South Tyrol. But actually, this will mean Ukraine doesn't have to give up the territory, which would be a constant source, of tension and would probably fuel the nationalists in Ukraine, accusing Zelensky of having to give in to Russian demands.

So, Ukraine doesn't have to give up territory.

On the other side, Russia can sell this in some way as a kind of victory.

Because the Russians and people with the Russian passport, have a huge autonomy, which they didn't have before.

That is why I say you need to first create a military situation on the ground, which forces Russia to give up the idea that at the end of the day one third of Ukraine basically is independent or even Russian.

ASW: So, you have to beat them first to talk to them…

In conflict research, there is this theory, that if conflict parties are exhausted, that's the best condition for negotiations.

If both sides have the feeling that by continuing the war, they risk losing more than winning, then they are ready to go to the negotiation table and to talk seriously.

Alexander S. Wolf: Or as another guest of mine said: the less hope, the more negotiation.

ASW: But then what about Mariupol, for instance?

Because the Russians, if Putin says, well, we won it after thousands of our people died and we destroyed the whole city and now we give it back. He cannot sell that to his people.

CM: Well, I think he can sell it to his people.

I mean, first of all, he has the control over the narrative.

And, as you know, the Russians shortly after the war basically banned all access to social media and foreign media people had beforehand in Russia.

Carlo Masala: So, the only source of information is Russian-controlled, either social media, or TV or newspapers.

So, the important thing is that Ukraine is not forced to recognize Russian-controlled territories as independent.

Because this could fuel Ukrainian nationalism.

Secondly, you can't rule out that Russia, after a kind of strategic pause, tries to finish the job.

Let's put it that way.

ASW: Like the guy who leaves the club after a fistfight gets drunk outside and comes back with friends.

Exactly. These are situations you have to avoid because otherwise you have a hot spot there for decades to come in Europe.

And we have already a couple of hotspots like the Balkans.

ASW: Yes. Plus one sends nukes over.

CM: And one is a nuclear power.

ASW: So, let's just assume that we get this ideal solution, which is a very smart one.

We would just stop talking about it.

The Russians would control it, and we look away.

Even the Ukrainians would accept that.

This territory around Mariupol is given back and the Russians will probably have some access so that they can use this territory as a transit route, maybe because they need that land bridge, apparently.

Okay. But then they are still enemies.

Do you see any possibility of bringing social peace back?

We have to lift the sanctions and we have to somehow start living with Russians again in a peaceful manner.

Carlo Masala: This would be a generational thing. This is a state-to-state war.

But we know basically from civil wars, which are not politically driven but ethnically driven, that it takes more than a generation to reconcile both sides and for reconciliation.

It is extremely necessary that both sides feel secure from each other.

So, you have to also negotiate probably about the demilitarized zones.

You have to negotiate some sort of regional arms control so that basically the Ukrainians don't feel threatened by the Russians, at the same time have a strong enough military they can rely upon so that they're confident that if everything breaks down, they're able to defend themselves.

It needs a whole package.

Carlo Masala: I think the really crucial point is what is the future of Putin?

Because right now it's not Putin's war.

I think this is too easy to say because large numbers of Russians do support the war.

I don't think that he will be gone in the next 3 to 4 years.

Alexander S. Wolf: Then let's end this with the hope that it goes like First World War, that one side the Russians will just you have a mutiny and the soldiers just stop fighting.

That would be the best solution.

The Russians did that once.

Perhaps that happens. This would solve everything.

Yeah. Mr. Ambassador, to end this, do you have an insight into human behavior and the behavior of nations leading war?

Carlo Masala: Well, actually, my message would be two things.

I think the 21st century will be more about the unexpected.

I mean, if you look, you know, 21st century Trump is never going to be president. He became president.

Russia will never attack Ukraine. Did you do it?

Secondly, we need much more preventive diplomacy, meaning stop being reactive, being more active in scenarios, which might come in the future.

You have to shape situations much more in advance in order to have the chance at least to prevent these things like the 21st or the 24th or February 20, 2022.

Alexander S. Wolf: The only thing I can add to this, the Romans said:
If you want peace, prepare war.

Mr. Masala, thank you for your work.

It's great what you do.

And thank you for your time.

Carlo Masala: Thank you, Mr. Wolf, for the invitation.

This article is part of our 17Academy "Journey to Peace" podcast series.

17Academy is a training platform for collaboration and peacebuilding by the AusserGewöhnlich Berlin foundation.

More about Ukraine? you can find here: Ekkehard Griep and the roadmap to peace 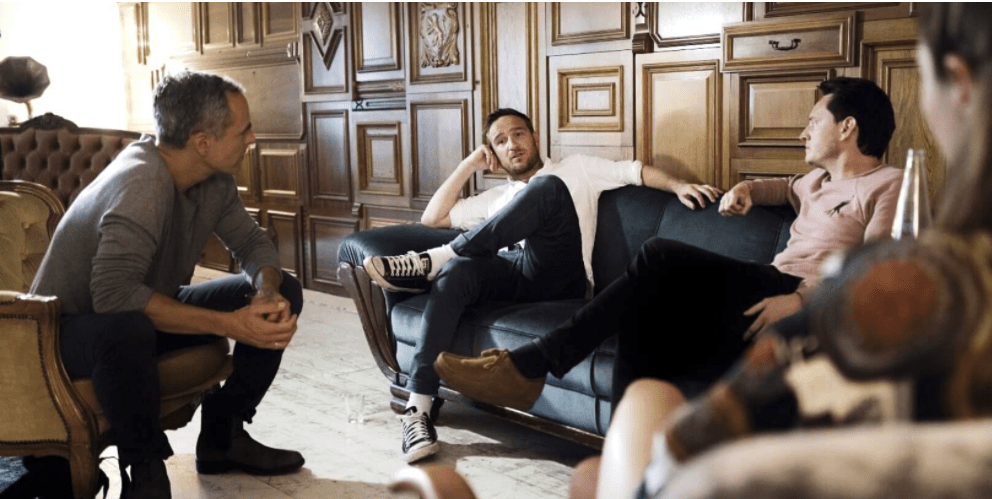